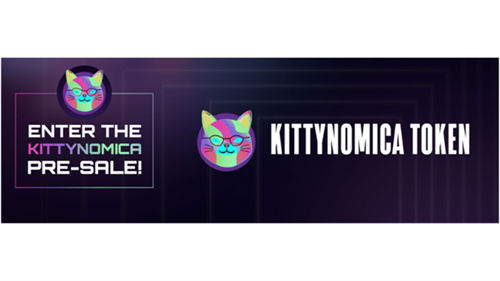 The world of games and kittens colliding in one beautiful place. Now that’s a world I could live in. Obviously, as a platform, there’s a whole lot more to it but how lovely to be surrounded by all the things we love so much. A world without these adorable creatures … no, let’s not go there!

If Paris Hilton can have her Malibu Mansion, then we can have our own universe where kitties reign supreme.

Everything You Need To Know About The Kittynomica Metaverse Platform

Before the advent of the internet, memes had little cultural and political significance. However, the rise of the internet has now ensured its circulation among meme lovers globally. Tapping into this worldwide trend, Kittynomica aims to integrate memes into the metaverse and engage more people.

Kittynomica is the ultimate metaverse platform in the coin market. This exciting platform allows users to create and mint memes as NFT collectibles and earn rewards.

One of Kittynomica’s goals is to help meme lovers experience the metaverse and create valuable memes. To accomplish this goal, Kittynomica has developed an ecosystem that binds like-minded people to create, monetize, and exchange memes. The Kittynomica team has visualized that memes are beyond mere jokes and can be leveraged to gain value.

Land and Map of Kittynomica (Kittyverse)
This represents physical parcels of land in the Kittyverse. Users can host their created content on their lands. This Kittynomica’s Land has a map of 96,464 lands on a standard 324 square meters.

The land serves as a physical space in the kittyverse that users own, can create, and monetize their assets. The land is vital to the Kittynomica ecosystem as it provides incentives for community growth and development by fostering economic activities.

Kittynomica Marketplace
Kittynomica’s marketplace is fully decentralized and organized by smart contracts. The main objective of this platform is to manage the demand and supply for all the digital assets traded on the Kittynomica platform.

Also, every asset on the Kittynomica platform is registered as an NFT, recorded on a blockchain ledger, so creators have actual ownership and copyright of their content. This feature makes it impossible for other users to steal creators’ hard work.

Kittynomica Governance
Users who own Kittynomica tokens will have the right to participate in the governance protocol on this platform through its Decentralized Autonomous Organization (DAO). This protocol will allow users to vote or delegate their voting rights on decisions like platform features and changes to the roadmap.

Kittynomica Token (KIN)
The platform adopts two utility tokens, which are $KIN and Land. These tokens can be used to buy, sell, mint, and stake digital assets to earn rewards. All the digital assets created by Kittynomica users are represented as BEP-1155 tokens.

The token also caters to the transaction fees associated with uploading memes and listing NFTs on the Kittynomica marketplace.

How Kittynomica Fare Against Its Competitors

Decentraland (MANA)
Decentraland is hosted on the Ethereum Blockchain Network, a prominent play-to-earn P2E adventure gaming platform in the metaverse.

The Decentraland team also unleashes its marketplace, which has a drag-and-drop editor that users can use to create interactive scenes and unique experiences within the Decentraland’s parcel of land.

Decentraland is also a decentralized platform that prioritizes the right of ownership of its users that buy digital land in the virtual world. This decentralization eliminates censorship vulnerabilities.

Furthermore, people vested in making decisions on the Decentraland platform are its token holders. They include MANA holders, real estate holders, and land investors. Holders of MANA have one unit of voting power, while a land parcel and estate token grant their owners 2000 units of the voting power.

Additionally, there are three utility tokens in Decentraland’s ecosystem: MANA, Land, and Estates. MANA is an ERC-20 token that can be used to purchase a piece of land and pay for services on Decentraland’s platform. The most expensive piece of Land on Decentraland was sold for 618,000 MANA in November 2021.

Also, the Land and Estate’s tokens are ERC-721 tokens, the two NFTs of Decentraland used to merge digital land tokens.

Kittynomica and Decentraland offer their users some fascinating features on the metaverse. Despite their similarities, Kittynomica provides fast, cheap, and more scalable transactions along with its excellent features.

« Learn About Metaverse Terminology And Definitions With This Cryptocurrency Glossary | NFT, Web 3.0, And More!
3 Coins You Might Want to Invest in Before 2023 »

Big Potential for Rate That Crypto, Apecoin, and Decentraland…